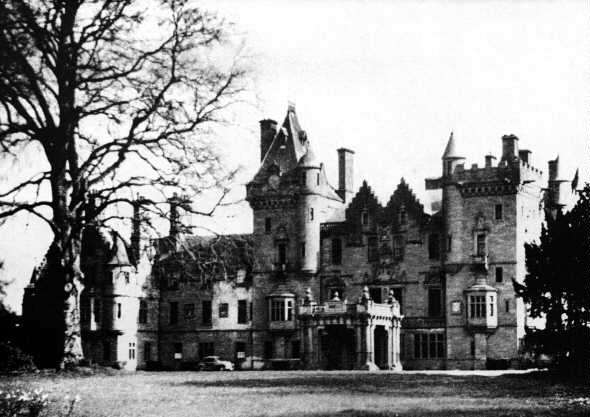 The name Kinnaird comes from the Gaelic Ceann-airde, meaning "the head of the hill-rise." And although the castle stands no more than 50 feet above the Vale of the Angus South Esk, its towers command a wide view of Strathmore and the distant Grampians.

It was in 1405 that Duthac Carnegie married Mariota, the owner of Kinnaird ( in Angus), and he soon acquired the neighbouring lands, which James V elevated into a barony by a Charter under the Great Seal.

The Carnegies and the King must have been on very friendly terms, for the "reddendo," or service rendered in payment by the family, was "one silver penny per year," plus the duty of maintaining the King's ale cellar in Angus "against his residence there."

It was in the days of the first Earl of Southesk that this "reddendo" was called into operation. In 1617, King James VI enjoyed the hospitality of Kinnaird on a long-delayed visit to Scotland. He had some wonderful days during this break from the cares of State, for he went "chasing the wild deer and following the roe" over nearby Montreathmont Moor. 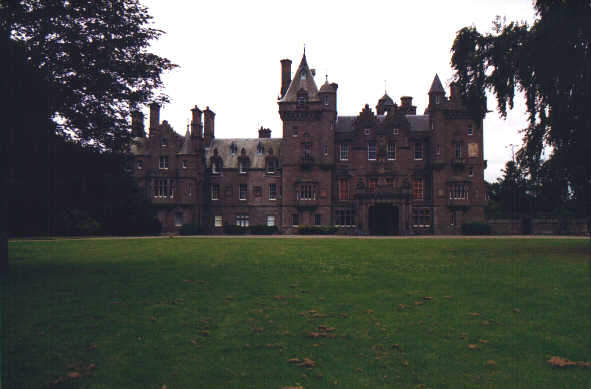 Kinnaird Castle was also visited by Charles I and Charles II. In the winter of 1715 the Old Pretender spent some time at the castle; but, alas, as a result of this, and of the Earl's adherence to the Stuart cause during the 1715 Jacobite Rebellion, his title and estate were forfeited. Eventually, however, they were recovered in 1764. Nearer our own time - in 1921 - much of the castle was destroyed by fire, and had to be rebuilt. It takes the form of a magnificent "chateau" and is delightful in its conical turrets, steep roofs, and armorial decorations. Kinnaird Castle is set in extensive parklands where herds of Highland cattle and fallow-deer roam. There are also formal gardens, a lake, and riverside walks alongside some fine salmon-fishing pools. 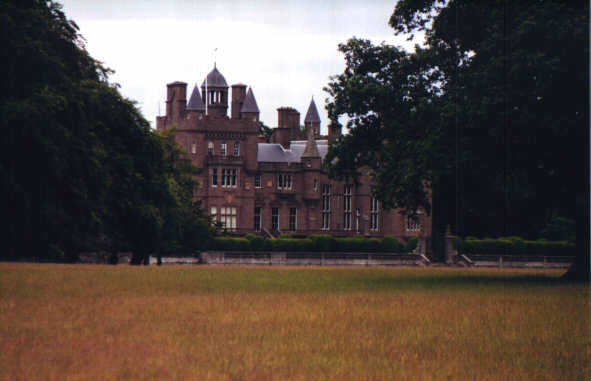 Parties are often conducted to see the castle's famous collection of pictures, which includes paintings of the Dutch, Flemish and Italian schools, as well as works by Jamesone, Raeburn, Durer, Vandyck and Holbein. One of the castle's great treasures is the bridal portrait by Jamesone of the young and handsome Marquis of Montrose. The painting was a wedding gift for Montrose's bride, Magdalen Carnegie of Kinnaird. The Marquis was 17 at this time, and still a student at Aberdeen University. Later he was to become the cavalier hero of the 17th century, and a great leader of men. On the Continent, at the Court of Louis XIII, his good looks and courteous manners even fluttered the heart of the Queen of France !

In 1616, Sir David Carnegie, 8th of Kinnaird, was made Lord Carnegie of Kinnaird. In 1633 he was created Earl of Southesk. The second Earl, James, was imprisoned by Cromwell for his Royalist beliefs. He was known as the "Black Earl" because he learned magic in Padau. Descending from a younger son of the 1st Earl of Southesk was Sir James Carnegie of Pittarrow, a distinguished soldier. In 1663 this line was created Baronets of Nova Scotia. During the Rising of 1715, Lord Southesk and Glengarry worked closely in the Jacobite Army. The family seat today is at Kinnaird Castle, Angus. 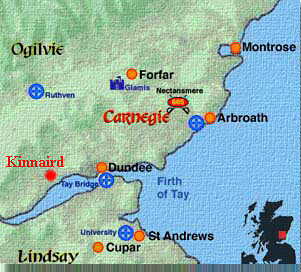